The notorious Bonnie and Clyde were killed by police in a roadside ambush. 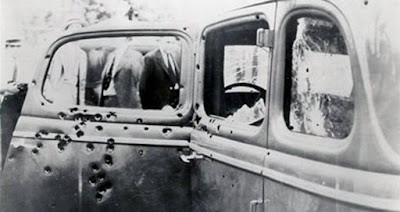 The car allegedly had 167 bullet holes:

On May 23rd, 1934, Bonnie and Clyde were gunned down in their stolen 1934 Ford Model 730 Deluxe Sedan. A posse of police officers ambushed the couple and unloaded 167 bullets into the car on a rural road in Bienville Parish, Louisiana.

“Each of us six officers had a shotgun and an automatic rifle and pistols. We opened fire with the automatic rifles. They were emptied before the car got even with us. Then we used shotguns,” officers Ted Hinton and Bob Alcorn stated afterwards. “There was smoke coming from the car, and it looked like it was on fire. After shooting the shotguns, we emptied the pistols at the car, which had passed us and ran into a ditch about 50 yards on down the road. It almost turned over. We kept shooting at the car even after it stopped. We weren’t taking any chances.”