Watching this brought warm memories of my dad because watching the Bears together was our thing and he liked to talk about this team from time to time.

So many big names from Bears history in the video — but instead of imagining what they looked like on the field making big plays, and trying to picture it in your head, you can watch them actually doing it.

Willie Galimore, Rick Casares, Billy Wade, Ronnie Bull, Mike Ditka, Johnny Morris, and Joe Marconi on offense, among others. Examining the 1963 NFL team stats shows that the offense was solidly middle of the pack in both rushing and passing and played a conservative ball control style with the fewest turnovers in the league, by a large margin (25, compared to 30 for the next best 49ers) with just 14 interceptions.

Wade, Marconi, and Ditka made the Pro Bowl that year, and after watching the video, you’ll know exactly why. Wade was athletic with quick feet and an accurate arm, and consistently among the league leaders in various passing numbers in that era, Marconi an absolute bruiser at fullback, and Ditka was Wade’s favorite target, dominant from his debut in 1961 when he was Rookie of the Year and then making All Pro from 1962-66.

And some of those blocks Ditka makes … whoa nellie! That guy was a football player.

The defense used pressure to shut down the opponent’s offense and force turnovers.

In 14 games the defense:

29 is a lot of picks among just 4 players, and I have to wonder how many times in NFL history a group of any four starters have reached that number.

Here’s the pro-football-reference.com summary of their season with stats.

Some things I learned from looking at team and individual stats: Wade was an excellent quarterback who was consistently among the league leaders in various passing numbers in the early 60s, Ditka was an immediate factor, dominant from his debut in 1961 when he was Rookie of the Year and then making All Pro from 62-66 (this is every season with the team). George Halas was Coach of the Year, and George Allen was a defensive assistant and then defensive coordinator the next two years before moving on to the Rams and later the Redskins as head coach.

Jim Croce wrote and recorded a lot of great music in a very short time. One of those was “Operator”, a story song about a guy who misses his ex-girlfriend something terrible, even though he tells himself he doesn’t. Oh, and just to twist the knife a little bit more, she left him for his “best old ex-friend Ray”.

He tries to call her from a pay phone and has an unexpected emotional moment with the telephone operator, telling her the whole story. But then he suddenly changes his mind and says “forget about this call” and “you can keep the dime”, which sounds like he finally seems to accept that it’s over and he needs to move on.

Recently I’ve watched two different videos featuring three different musicians detailing how great this song is, both from a creative viewpoint and from a fan’s.

Next is Fil who also runs a great channel for analyzing popular songs.

All three of these professional musicians are just blown away by the storytelling and overall quality of this song, and by the sweet guitar playing of both Jim and his musical partner Maury Muehlheisen.

Jim and Maury created about 20 such songs with their two fingerstyle guitar technique, weaving in and around each other, playing a simple but beautiful melody, along with fills, rhythm and constant chord changes.

Simple but not easy; if it was easy, everyone would be doing it, and these two guys wouldn’t have carved out a wonderful musical legacy in a few short years.

As with most of Jim’s songs he wrote it about a real life scene he witnessed while in the Army, lined up at the pay phone to call home, and hearing another guy have this experience right before his very eyes.

Both of these creative geniuses were killed in a tragic plane crash on September 20, 1973, when I was 14 years old. I was a huge fan, and was crushed by the news, and have missed both of them and their beautiful transcendent music ever since.

And in an amazing coincidence, my first son was born on that same date 15 years later. His name is James. It’s just a coincidence, I think.

published on Monday, October 24, 2022
Labels: Inspiring, Music, Someone You Should Know More About, Unexpected Delights, Video

Tangled Up in Bob

Not really a Bob Dylan fan but his 1975 album “Blood on the Tracks” is very very good, his best according to a lot of people, such as me for example.

And the best song on his best album is “Tangled Up in Blue”.

Tangled Up in Blue

The music, the band, the arrangement, etc. are all quite good and draw you in as a listener.

The lyrics are at or near the pinnacle of the art form.

You could use this song to teach a class on how to create imagery that sticks in our heads, how to evoke emotion and longing and regret for past loves and mistakes made, how to tell a story with a long arc including past, present, and future, putting words together in very interesting ways, including references to Rimbaud and “Italian poets from the 15th century” without becoming a tedious bore, and much more.

Truth be told, I’m not really much of a “lyrics guy” and don’t much like the influence Dylan had on artists who trued to emulate him did not have his talent for lyrics — a dangerous combo — mainly because it resulted in pretentious, precious music in the 60s and later, but that’s a topic for another day.

So you can believe me when I tell you that this tune is the bee’s knees. At the top.

Lyrically we can group it with many other classic songs from all musical genres, as the best of the best — it’s just not possible to write a better song. Many just as good, none better.

This breakdown video from the excellent “Polyphonic” channel explains it in more detail (and probably better than I ever could).

Tangled Up in Blue:  Deciphering a Bob Dylan Masterpiece

And it was just the first of four voyages he would take, discovering not just the Bahamas, Cuba, and Hispaniola (today’s Dominican Republic  and Haiti), but the Gulf of Mexico, and South and Central America too.

He was a busy guy, when he wasn’t subjugating entire races of people I guess.

On August 3, 1492, Columbus set sail from Palos, Spain, with three small ships, the Santa Maria, the Pinta and the Nina. On October 12, the expedition reached land, probably Watling Island in the Bahamas. Later that month, Columbus sighted Cuba, which he thought was mainland China, and in December the expedition landed on Hispaniola, which Columbus thought might be Japan. He established a small colony there with 39 of his men. The explorer returned to Spain with gold, spices, and “Indian” captives in March 1493 and was received with the highest honors by the Spanish court. He was the first European to explore the Americas since the Vikings set up colonies in Greenland and Newfoundland in the 10th century.

He had a bit of trouble getting the first voyage financed, rejected by King John II of Portugal and then King Ferdinand and Queen Isabella of Spain (twice) before they finally agreed after Spain defeated the Moors (or “Moops”) in January 1492 at Granada.

Just 14 years later in 1506 he passed away, and Spain — which had hoped to find a route to the “Far East” — instead discovered the New World and all the riches and peoples they could plunder.

Columbus died in Spain in 1506 without realizing the scope of what he did achieve: He had discovered for Europe the New World, whose riches over the next century would help make Spain the wealthiest and most powerful nation on earth. He also unleashed centuries of brutal colonization, the transatlantic slave trade and the deaths of millions of Native Americans from murder and disease.

Well, let’s be honest here, it wasn’t really Columbus who “unleashed” all that, it was Spain, followed of course by the British, French, and Dutch. That was just how the whole world worked. For thousands of years. 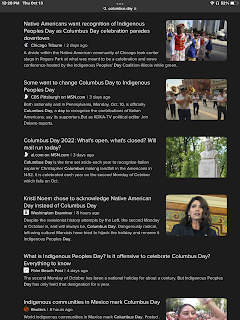 Slavery and the slave trade was practiced by every nation with the power to do so. Until the British outlawed slavery in 1807 (and the slave trade in 1833) it was the worldwide historical norm. All of history has been thus, for everyone everywhere — except for the rich and powerful of course, and they got rich and powerful by subjugating and enslaving and murdering people, and taking land and property, and every other form of unpleasantness one can imagine.

What exactly are we supposed to do about it? Impose upon modern expectations of civilization, of human rights that didn’t exist yet, on it? It was what it was, and it’s best to view it by the norms of the time. Life for everyone everywhere was nasty, brutish, and short.

If it wasn’t Columbus who discovered America, somebody else would have, and that man would get blamed as Columbus is now, even though the exact same colonization and enslavement and murder would have followed just as night follows day, for the reasons given above.

The revisionist tries to willfully misrepresent history and demonize everyone who did anything great for daring to live in their own times according to their own norms, instead of in today’s times according to today’s norms. It’s tiresome, ahistorical, and tremendously disrespectful towards leaders of the past, and makes us all dumber and myopic.

published on Wednesday, October 12, 2022
Labels: Americana, Geography, History, Leadership, These are my principles and if you don’t like them well I have others

The blues legend wrote, recorded, and performed so many classic songs for so long that it’s difficult to choose just one or two (or four or five) for inclusion here …

But onward we must go.

He solos for a full two minutes and 45 seconds as the intro — and an incredible solo it is — before just ripping the vocals to shreds too.

Both his guitar playing and his singing convey tremendous and unmistakable emotional power and range to the listener, which is one major reason why he is one of a kind.

“You Upset Me Baby” (studio version, single originally from 1954)

Like listening to AM radio late at night in 1954 on some Southern station, since this was before Elvis (and others) popularized “race” music (yes that’s what it was called by Billboard and the radio industry).

Later in the 1960s the Beatles, Rolling Stones, Animals, and countless other bands, plus individual guitarists like Eric Clapton and Jeff Beck, having immersed themselves in Blues and R&B during their youth, would go on to popularize it for a mass audience and pay homage to it by actually naming their influences and fully crediting the origin of their style of playing.

B. B. King was very high on all their lists.

None of that happened with the Elvis wave. They just kinda pretended they invented it. Which is unfortunate.

The influence on guys like Clapton from this next tune are obvious.

This one is new to me, his version of Leon Russell’s classic “Hummingbird” live from Japan in 1971 — he makes the song his own and the guitar tone here is fabulous.

I could go on and on and on — the man recorded an incredible amount of great music, toured year-round for decades, and lived long enough to record albums with guitar heroes who claimed him as their hero like Keith Richards and Eric Clapton and John Mayer.

He was in a class by himself.