When prayers are not enough 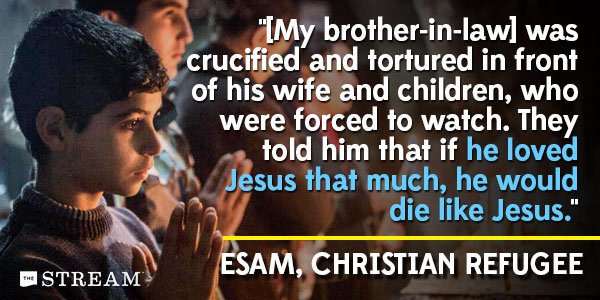 I've noticed a serious lack of attention -- even within Christianity itself -- to Christian persecution in general, especially in foreign lands, and by Muslims.

This has become a glaring problem to some of us, with Christian churches usually led by clergy who choose not to acknowledge that Christian persecution is occurring in the world today, even though I know that it is. And let's be clear: by "persecution" we don't mean calling you names. We mean the worst kinds of persecution: murder, rape, enslavement, burning churches and homes, forcing people to flee their homes with nothing but the clothes on their backs. It's like ethnic cleansing, or attempted genocide, but by religious affiliation.

You would think that of all the people that should care about that, it's Christians around the world. I don't see much evidence of that, however. And it drives me nuts.

In our church, I don't recall ever hearing a mention of this Christian persecution, even though I read about it on the Internet just about every week. Our sermons never mention the atrocities committed by Muslims against Christianity, both its people and its symbols.

Thousands of Christians and other religious minorities have been killed during the rise of ISIS, whether from military operations or various disgusting spectacles - filmed of course - including drowning them in cages, burning them alive, crucifying children, etc. It's subhuman and nauseating, yet it doesn't merit a mention? This is bizarre.

In Egypt, after the Muslim Brotherhood uprising in 2011, mobs torched close to 100 ancient Coptic churches with the obvious approval by the authorities who looked the other way while the torches were lit. In Syria and Iraq, ancient Assyrian churches from the time of Jesus himself have been purposefully destroyed by ISIS.

These stories show up again and again in my news feeds, because I follow sites that show concern about the health of Christianity in a world filled with apologists who - please explain this to me - are compelled to complain about Donald Trump but not to criticize ISIS throwing gays to their deaths from tall buildings.

The lack of attention, likewise, has also become a glaring problem in the political world. President Obama rarely mentions Christian persecution, or persecution of other religions, by Muslims. He is, allegedly, Christian. Doesn't that seem a little odd? And defending religious freedom around the world is part of the job description, since our country was founded upon that idea, first and foremost.

Neither is acceptable. But I'm pretty sure it's that last one. And that's shameful.