Someone You Should Know More About: Gen. Chuck Yeager

One of the most amazing life stories you will ever read is Gen. Chuck Yeager’s biography “Yeager”.

His fascinating life story filled with adventure and great risk to accomplish great things would make an incredible movie — and if we lived in a country that still celebrated its heroes, that movie should have been made in the 1980s on the tails of the tremendously successful “The Right Stuff” and “Apollo 13”, when his name was already in the news.

In fact his story of relentless confidence and courage in the face of daily risk of death would have been a perfect counterweight to the oppressive gloom and loss of national confidence after the horrific Challenger explosion in 1986. Gen. Yeager was even on the investigating commission to look into it, along with another personal hero of mine, Prof. Richard Feynman.

Yeager accomplished many things, but the most famous by far was becoming the first human to break the sound barrier — on Oct 14, 1947, with two broken ribs — and if you don’t understand what that is or why it matters or how dangerous it was, here’s why:

On October 14 Air Force Capt. Charles E. (“Chuck”) Yeager, flying a Bell X-I, became the first pilot to break the sound barrier. Today, with supersonic flight routine, the sound barrier seems an arbitrary figure, like a .300 batting average. But during and immediately after World War II it was real—and frightening. As planes of that era approached the speed of sound, cockpit controls would lock up and massive, uncontrollable turbulence would batter the airframe.

The X-I was designed for breaking the sound barrier and nothing else. It was tiny (Yeager had been chosen in part for his small stature), and its fuselage was shaped like a .50-caliber bullet, because bullets were known to achieve supersonic speeds. Its wings were swept back in a V shape to move the center of gravity toward the rear. Since jets were still in their early stages, the X-I had a rocket engine that ran on diluted ethyl alcohol and liquid oxygen. It provided two and a half minutes of extremely powerful thrust.

To break the barrier, the X-I was loaded into the bomb bay of a B-29 and released at twenty-five thousand feet with Yeager in the cockpit. He climbed to forty-two thousand feet on two of the engine’s four chambers, then switched on a third and watched his speed indicator zoom to seven hundred miles per hour, 1.06 times the speed of sound at that altitude. Observers on the ground heard a sonic boom, a sound that would become familiar in years to come. Yeager shot upward until his fuel was exhausted and then glided to a landing at Muroc Army Air Field in California. The Air Force did not officially announce the achievement until June 1948, though Aviation Week magazine had leaked word the previous December.

It was all experimentation all the time, and every test pilot that wedged themselves into any of these experimental aircraft to go faster and higher than anyone had every flown, into the upper reaches of our atmosphere, almost into space, was risking death at any moment.

The Bell X-1 had no ejection capability, and exiting through the side door was a sure decapitation via the wing. You were trapped in an experimental aircraft. Good luck!

They did this every day. That was the job. Some of their test pilot friends did not make it due to the daily risk of “augering in” or crashing into the desert.

The whole idea seemed crazy to many experts at the time — nobody knew what would happen if an aircraft tried to break Mach I. Would it explode? Would it shake violently apart? Who knows? From this history.com article:

For years, many aviators believed that man was not meant to fly faster than the speed of sound, theorizing that transonic drag rise would tear any aircraft apart.

And yet a group of courageous test pilots including Yeager were determined to resolve this question, at risk of violent death. Several of them paid that price.

But that’s not all. As Chuck himself says in “Yeager”, they spent many nights out carousing at a local watering hole named Pancho’s — the owner was also a pilot and promised a free steak dinner (!) to the first pilot to break the sound barrier — and then getting up before the crack of dawn to get into a test aircraft and risk their lives again.

That my friends is Living On The Edge. But nobody knows about all this unless they happened to read “Yeager”. This is dumbfounding to me — his life story is one of the most remarkable true life adventure stories anyone could ever imagine, but there’s no movie version!?!

Here he is with the test aircraft Bell X-1 he named “Glamourous Glennis” to honor his wife: 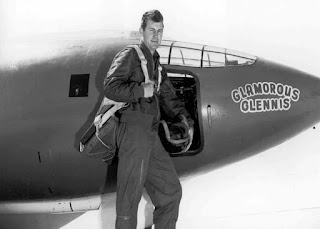 The aircraft is shaped like a .50 caliber bullet because that shape was known to go supersonic without doing strange and unpredictable things in the air.

Before his test pilot days, he flew fighters like the P-51 Mustang in WWII over Europe, 61 missions in all, with 13 kills, including making “ace in a day” with 5 in one mission. Shot down on March 5, 1944, he was sheltered by the French Underground and helped them build bombs until they helped him escape to Spain a few weeks later. The D-Day invasion would follow a few weeks after, helping him get back into the cockpit when the French Underground membership came out of hiding after liberation by the Allies, removing extra security risk from pilots getting shot down again.

There’s much more in “Yeager” — his childhood alone would make a fascinating adventure book for boys, about growing up in rural West Virginia, hunting and exploring with his friends — and I highly recommend reading this book to anyone who loves adventure and values courage and leadership. In fact I would recommend that every American child should read this book by 7th grade, it’s that important to our national story to understand his life and how it helps define America in the 20th century.