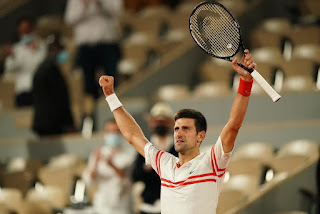 No, I never heard of the two women players either. That’s a lot of syllables.

In the Men’s semifinal Djokific defeated Rafael Nadal in 4 sets, despite falling behind 5-0 to start the first set.

Nadal’s French Open record is so completely dominant it’s hard to fully comprehend it:  he was riding a 35 match winning streak, his overall record is 105-3, and has won the tournament 13 times.

Dkojokic said it was one of his top three matches of his entire career. Win a title win Sunday he could become the first player of the Open Era to win all 4 major titles multiple  times — the fact that none of the greats of the last 50+ years have done this is amazing to me.

Both Nadal and Djokovic have always struck me as very likable, along with Federer. Men’s tennis has been lucky to have them as leaders — one wonders who is in line to carry that torch going forward.

Will update with results for both matches over the weekend ... the ladies’ match is ongoing as I type this.

Dkokovic wins - becomes “first man in the Open Era to win the four majors twice and to have come from two sets down twice en route to a Grand Slam title".

Congrats to both champions.