It Was a Grand Prix Sunday

Watching Formula 1 Grand Prix auto racing is a great way to start any day of the week, and on Father’s Day it feels like a present from someone I don’t even know.

Sunday was the French Grand Prix and I knew this because just this week I started watching “Formula 1: Drive to Survive” on Netflix and now I am certifiably hooked on this show — it’s an excellent primer for watching the sport, introducing the drivers and racing teams and then roping you in with exhilirating racecam footage from inside the cars.

I was quite pleased to discover that ESPN carried it live. Highlight video and story here (or click image) 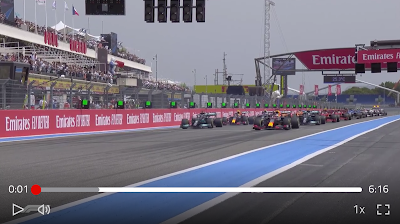 Later I watched the Grand Prix at Road America in Elkhart Lake, Wisconsin — a personal favorite weekend-getaway destination of ours in recent years. Alex Palou won it with two laps to go when leader Josef Newgarden suddenly lost power coming out of the yellow caution flag.

I believe I have found a new sport to follow. Then it was time for the U.S. Open, and after that, U.S. Olympic Team qualifying for Track and Field. More on those tomorrow.