170 Years Ago This Week: Uncle Tom’s Cabin is Published, Fueling the Abolitionist Movement 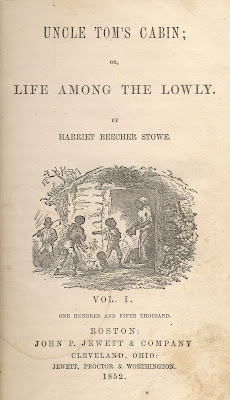 And becomes the best-selling book of the 19th century in the U.S. (besides the Bible).

You can read the summary of the plot here — but far more interesting historically is the impact it had.

Harriet Beecher Stowe wrote it in response to the Fugitive Slave Act of 1850 which threw gas on the fire, exacerbating a long-running sore point between free and slave states — how much are people in free states obligated to help return escaped slaves to their owners? How legally liable can they be? It quickly turns into a thorny question with conflicts between states, and between federal and state law.

Uncle Tom’s Cabin resonated with the public because it told a dramatic story about contemporary moral struggles with a noble Christian slave protagonist, and in telling that story made a convincing case that slavery was fundamentally incompatible with Christianity.

The book is best understood not as an isolated incident but as part of the abolitionist movement started in the 1700s in both the Colonies and Britain and was fueled by two major forces, the Enlightenment and Christianity — and it directly opposed the very big business that the slave trade had become since the 1500s.

The slave trade was very big business not just for the British but for the Dutch, French, Portuguese, and Spaniards in the West Indies, South America, and United States. It was global, and a key piece of colonial power.

The entire economies in many of these places depended on slavery and the slave trade — this was well before the Industrial Revolution of the 19th century that would transform every modern economy in the world. This means that in addition to moral questions around slavery and the slave trade there were very powerful economic interests with little incentive to do away with it.

The British were the leading edge of the abolitionist movement and the first to abolish the slave trade (1807) and then the practice itself (1833). Prominent figures were James Oglethorpe, William Wilberforce, and several other Brits.

Oglethorpe was a British soldier and MP who founded the colony of Georgia in 1732 (as a place to send “the unemployed and the unemployable”) and outlawed slavery there for a time from 1735 to 1750.

Wilberforce was a British MP who, after becoming an Evangelical Christian in 1785 and the main abolitionist in Parliament, was a prime driver behind the passage of the Slave Trade Act of 1807 and then the Slavery Abolition Act of 1833 in Parliament.

But there’s so much more and I encourage clicking one or more of the links below.

Somehow the British, at one time the largest slaveholders in the world, get little recognition for their role in abolishing slavery throughout their lands. They also avoided fighting a Civil War over it, probably because it was more of a Colonialism issue than an internal regional conflict.

More on the U.S. role in the abolitionist movement soon.

Recommended listening: Dan Carlin’s Hardcore History podcast in general and his most recent episode on the Atlantic slave trade, it’s fascinating and insightful, as always. I learned a lot and I’m only halfway through (it’s nearly 6 hours in length, so you have to break it into consumable chunks).