51 Years Ago Today: Ali vs. Frazier

“The Fight of the Century”

That was how it was promoted, and that’s what it was. 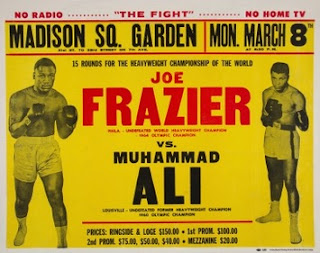 One of the biggest title fights in heavyweight history featuring two undefeated champs (first time in history) and Ali’s first title fight in almost 4 years after his title (won from Sonny Liston in 1964) was stripped for refusing induction into the military.

The build-up and hype and drama before this fight was incredible, talked about for months. And so often, what that leads to is disappointment. Not this time.

15 rounds, two great boxers, electricity in the air, and a rare knockdown of Ali in the 15th.

Frazier won by unanimous decision but afterwards he looked more like the loser of the fight from Ali’s quick and punishing jabs. There’s a famous photo of Frazier post-fight with giant welts above and below both eyes, but I can’t seem to find it online.

A good breakdown of the fight.

The 15th round knockdown of Ali.

Both fighters were also Olympic gold medalists — Ali (known by his given name Cassius Clay at the time) in 1960 and Frazier in 1964. Here’s an article about their Olympic wins.

George Foreman won gold in 1968, and between the three of them they would pass the world title amongst themselves for many years to follow as the most dominant heavyweights throughout the late 60s and 1970s. This period was a highlight in heavyweight boxing history.