One of the most fascinating people in history, by 1807 Napoleon had conquered, annexed or strong-armed nearly all of Europe.

Shrewd and ambitious, he took advantage of the chaos after the French Revolution:  promoted all the way to commander of the entire French military at 26, and ran a successful coup to run the country at 30 in 1799.

He fought more battles than Alexander the Great and Julius Caesar combined, according to the Why Napoleon? page at the Napoleonic Historical Society, calling him “the most famous self-made man in history”, and they make a good case for it. 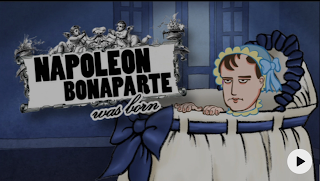 I recommend reading the Napoleon page at history.com and watching the short and entertaining video at the top to get a good summary of his impressive accomplishments away from the battlefield too: leading the country out of chaos, building Paris into a beautiful city of parks and boulevards, creating the French banking system and setting up a “fair and modern” legal code that’s still in use today.

But he was headed straight for the rocks in a major way.

Starting in 1812 his armies suffered a string of crushing defeats — the first and the worst, by far, was the disastrous and infamous invasion of Russia in 1812 (more on that soon). Then in 1813 after other nation-states saw an opportunity and joined together to fight his forces, he lost decisively at the Battle of Leipzig. By March 30, 1814, those enemy forces marched into Paris and Napoleon abdicated.

In less than two years he went from the most powerful ruler in the world to isolated, shamed and defeated.

The next 15 months were, um, interesting. In April 1814 he was exiled to Elba, a tiny island in the Mediterranean — but escaped with the help of 1,000 supporters and returned to Paris triumphant in March 1815, at which time Britain, Austria, Prussia, and Russia began to prepare for war. So Napoleon raised an army and by June he invaded Belgium but suffered another epic defeat in June at Waterloo, whereupon he was handed over to the Brits and they exiled him again, this time to St Helena in the middle of the Atlantic Ocean.