No, not Russia … Prussia

Here's another entertaining video from History Matters — I laughed out loud a couple times at the graphics, especially the clock with "War With France" at every hour — about how Prussia just sort of evaporated away over the course of several decades from the 1860s through 1932. 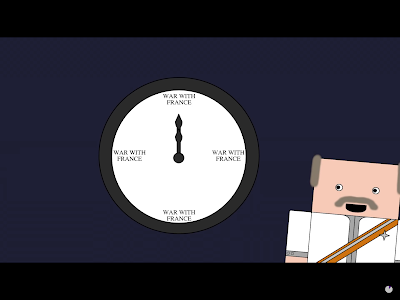 So as with all of European history this story is insanely complicated, chopped up into little fiefdoms, duchies, territories, and kingdoms with cultural borders that sometimes match sovereign borders and sometimes do not. Never-ending war is the obvious result, and that's what they had.

The two most well-known Prussian leaders from that time, at least to me, were Otto von Bismarck and Carl von Clausewitz.

Clausewitz of course is one of the most famous military strategists in history responsible for the saying "war is politics by other means" plus many other advancements in military theory. From Wikipedia:

He stressed the dialectical interaction of diverse factors, noting how unexpected developments unfolding under the "fog of war" (i.e., in the face of incomplete, dubious, and often completely erroneous information and high levels of fear, doubt, and excitement) call for rapid decisions by alert commanders. He saw history as a vital check on erudite abstractions that did not accord with experience. In contrast to the early work of Antoine-Henri Jomini, he argued that war could not be quantified or reduced to mapwork, geometry, and graphs. Clausewitz had many aphorisms, of which the most famous is "War is the continuation of politics by other means."

"Fog of war" requiring rapid decisions by alert commanders ... history as a vital check on erudite abstractions that do not accord with experience ... war cannot be quantified or reduced to mapwork, geometry, and graphs ... yep, that all checks out.

He was way, way ahead of his time, and is at least one key reason that Prussia has the reputation of having been an advanced military power.

Otto von Bismarck presided over the unification of Germany in 1871 after the Franco-Prussian War and served as Chancellor of that newly-unified state until his death in 1890, leading the continent politically during that time.

Bismarck's diplomacy of Realpolitik and powerful rule at home gained him the nickname the Iron Chancellor. German unification and its rapid economic growth was the foundation to his foreign policy. He disliked colonialism but reluctantly built an overseas empire when it was demanded by both elite and mass opinion. Juggling a very complex interlocking series of conferences, negotiations and alliances, he used his diplomatic skills to maintain Germany's position.

A 19th century European leader who disliked colonialism and had to be pushed into it … imagine that.

Also, a question:  is it possible that having one strong, skillful, diplomatic leader like Bismarck to guide a place like Europe — a violent chaotic mess for centuries — is a better bet than the NGO system that followed after WWI? Something to ponder.

European history fascinates me, with all the intermarried royalty and competing ethnic tribes and the Pope and constant war and evolving borders and a near-total lack of any kind of rights for citizens or even the idea of “citizen”. Growing up in America in the late 20th century, it seems nearly impossible to envision what life was like for people forced to live under those conditions, and serves as a reminder that we should be careful what we wish for when we demand “progress”.

History Matters has another video on the early history of Prussia from it’s start in 1525 that I will cover in the next couple of weeks.