Julius Caesar Assassinated on this Day in 44 BC

He was stabbed by 30-60 senators. That’s quite an assassination plot to keep secret, with that many people involved, and nobody leaked it. 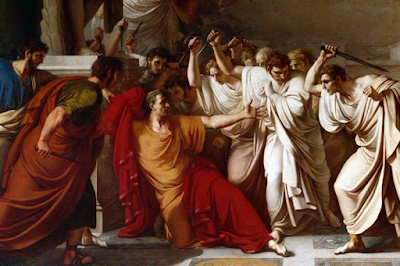 His ambition had driven the Roman world into civil war, but his military genius had seen that contest settled in his favor. Ultimately, Caesar was undone by his own magnanimity, for when it came to his political opponents, he was generous and forgiving to a fault. The leaders of the plot to kill him were former enemies who Caesar believed had come to support him.

More on Julius Caesar here. One of the most famous people in the history of the world. Our month of July is named after him, and he (along with Aleaxndrian astronomer Sisogenes) created the Julian Calendar which is nearly identical to the Gregorian Calendar we use today, and was used across the world until the 16th century, when in 1582 Pope Gregory modified it to fix errors introduced by Sisogenes who had assigned the length of the solar year incorrectly at 365 and 1/4 days, too long by 11 minutes and change.

Over 1600 years this adds up and the seasons get all whacky. To re-align the seasons, Pope Gregory used the dates from 325 AD — the year of the First Council of Nicaea that essentially established Christianity as the “official” religion of the Roman Empire — which is why we have the first day of Spring on March 21 today. Fun fact!

In any case we’ve all probably heard the saying “beware the Ides of March”, a line directly from William Shakespeare’s play Julius Caesar. But what exactly is the “Ides of March”? Where did that even come from?

Wikipedia tells us that — as one might suspect — it’s related to the cycles of the moon and each month has 3 key dates:  the Nones, the Ides, and the Kalends.

And on a personal note, my late father would have been 85 today. Miss you, Dad.