The lyrics are so visual and specific — you can easily picture yourself in that place and time.

Here are the verses only, all in a row:

And because Croce is so good at pacing the lyrics, with his great singing voice, and the music is basic and spare and beautiful, all of that naturally highlights the imagery within the lyrics.

His life story is full of the kind of lived experiences that make great songwriters and musicians, with odd jobs and traveling the world playing music. His Wikipedia entry is well worth reading.

The Ventures pay tribute to Jim Croce the year after he died with “The Jim Croce Songbook”. All instrumental, as we would expect from The Ventures, and by highlighting just the music and melody with no lyrics, the strength of the great Jim Croce and Maury Muehleisen trademark twin acoustic fingerstyle guitar sound is brought to the foreground. These songs are quite strong even without any lyrics at all.

He self-financed his first album “Facets’ in 1966 with a $500 cash wedding gift from his parents who insisted that he use it for that purpose, assuming it would fail spectacularly and force him to give up music and get a real job. However he not only sold out all 500 copies, he made a $2500 profit!

More great lyrics, visual and specific, but this time it’s giving advice to a friend who is always searching for the shiny object in the fish tank:

Don't you draw the queen of diamonds, boy
She'll beat you if she's able
You know the queen of hearts is always your best bet
Now it seems to me, some fine things
Have been laid upon your table
But you only want the ones that you can't get

Desperado, oh, you ain't gettin' no younger
Your pain and your hunger, they're drivin' you home
And freedom, oh freedom well, that's just some people talkin'
Your prison is walking through this world all alone

When I was younger, lyrics like this went over my head. Wisdom is usually lost on the young.

“Your prison is walking through this world all alone” ... visual and specific.

Another version of Desperado, from Linda Ronstadt and The Eagles on the legendary TV show Don Kirshner’s Rock Concert from 1974.

Desperado was the first song Henley and Frey ever wrote together as a team. The second was Tequila Sunrise, just a few days later. These are two of the best songs the Eagles ever did, written in the first week they teamed up. Seems they caught lighting in a bottle.

The famous back cover photo (by Henry Diltz, see more here) recreates the capture of the Dalton Gang. 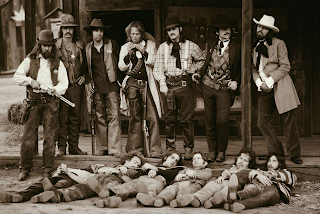 These factoids and more can be found at the Desperado (the album) Wikipedia entry.

Short on time so no Art today.