Accepted wisdom in baseball has changed through the years — due to the ascension of advanced metrics like launch angle— causing many teams to demote the value of the contact hitter in their hierarchy of lineup needs.

This was a mistake.

I’ve written on this before, several times, and will do so again, but for now let’s just watch this hit to drive in the game-winning run in the 8th inning on Saturday by Matt Duffy:

Click here to watch if above does not work.

Here he is right after hitting the ball: 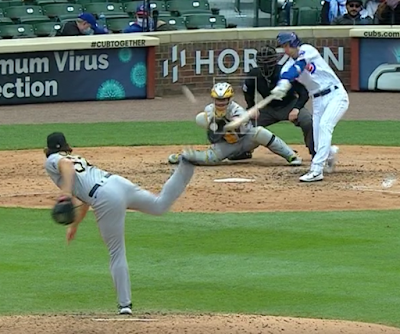 Note the orientation of his left foot and his entire left leg, his head, shoulders, and hips — to right field. Physics and common sense tell us this is the _only_ sensible orientation of your body with a pitch on the outer third of the plate, as this one is. Trying to hit such a pitch anywhere *but* right field is giving away an out, and in this case, would have stranded the go-ahead run at second base going into the ninth inning.

Look how far his hips — the center of rotation that creates most of the energy in the swing — are from the ball. Probably 5 feet or more? If he tries to hit that pitch to the left side of the diamond, he almost certainly strikes out, or hits a weak grounder to an infielder. The physics of swinging a bat to hit a ball hard won’t allow you to hit that pitch to the left side and hit it hard enough to get on base. Which is, after all, the whole point of swinging the bat.

The Cubs, along with many other teams I would guess, have in recent years typically had only one guy on the entire roster who can do this consistently. There’s an epidemic across the league of this — mostly due to over-measuring and over-analyzing whatever we decide to measure and anaylze, launch angle in particular — which causes an increase in 3 outcomes (strikeout, walk, home run) and a decrease in all others.

What we called an “uppercut” swing — a decidedly bad thing because it made you strike out too much — has been re-branded as “launch angle”. See, you can “launch” the ball instead of just hitting it! Except when you strike out of course.

The list of ways that this changes the game is long and varied but a primary change is fewer baserunners with the aforementioned increase in walks, strikeouts, and home runs, and therefore far fewer exciting baserunning plays, because on those rarer occasions when there are baserunners, there are fewer hits like Duffy’s that advance (or drive in) those runners.

The effect is exponential, not additive. There is also a huge increase in use of defensive shifts, overloading the zones on the field where hitters have shown they almost always hit the ball.

Far, far less action in the game, in other words. It’s become boring, or more boring, depending on your patience. The league is tinkering with rules changes to increase excitement and shorten games, but it seems to me the simplest and most important change is the one they cannot mandate:  the way hitters swing the bat.

This “hit it where it’s pitched” approach that Duffy employs — and most players used to employ, 20 or more years ago — is the main reason Duffy made the team out of spring trainng, and Cubs manager David Ross is quoted as saying that.

Duffy delivering that hit in that spot is the key reason they won the game Saturday.