U.S. Open Finals This Weekend ... History Being Made

For the first time in ... forever? ... both finalists were just 18 years of age when the tournament started: Emma Raducanu (Great Britain) and Leylah Fernandez (Canada).

Raducanu had to win three qualifying rounds to even make it to the main draw — she has won 9 matches in a row without losing a single set — and is the first such Grand Slam finalist in the Open era (starting 1968). That’s 53 years. 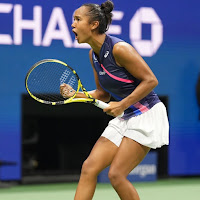 The matchup should be entertaining and will definitely be historic, but whoever wins, this U.S. Open will be known as the one where the young ladies just mowed down the competition with wanton abandon.

It has been quite compelling as a result and I’ve watched as much as I could.

Novak Djokovic vs. Danill Medvedev, the top two seeds ... what are the odds?

By far the biggest story with this match is that Djokovic is going for two amazing career accomplishments in one match: a Grand Slam (winning all 4 majors in the same year) and the all time record for victories in majors (21). The last Grand Slam was by Rod Laver in 1969, 52 years ago.

The decisive game of the third set was the match in microcosm. In one of the most intriguing non-deuce games you'll ever see, Djokovic broke for the set after rallies of 18, 32, 12, 21, 53 and 16 balls.