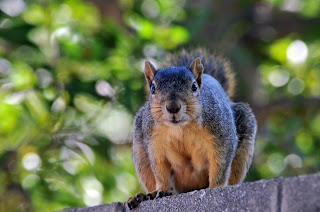 Late one afternoon while out walking I noticed a squirrel run across the grass and start to climb up a tree — and then he just stopped, four feet off the ground, frozen.

It seemed maybe he was eyeing me carefully as I walked by. A defensive posture, probably.

But maybe not. Maybe he was mentally running through his list of attack options.

Maybe he was sick and tired of all these annoying two-legged intruders on his territory and finally ready to actually do something about it, for once.

Maybe he had claws like eagle talons, and teeth like a bear, and jaws like a python that unhinge to swallow prey. Maybe I narrowly escaped with my life and body parts intact.

Who knows? Maybe killer squirrels are actually a thing but they hide it well and are very, very patient, waiting for the right moment to unleash the mass coordinated attack.

It’s also possible, I guess, that he froze like that because he was fearing for his life, seeing me as a predator looking for a tasty meal like him, frozen in hopes I wouldn’t see him.

Or maybe he noticed a different predator nearby, not me, and froze to avoid detection.

We’ll never really know for sure, will we?