They unloaded nearly all their “best” players in late July — all were facing free agency at end of year anyway, and this is how it works when you lost 11 in a row with those players in June and early July — and since then have been playing lots of minor-leaguers.

Who knows what they really have here, I am sure not betting on anything one way or the other, but some of these guys have been playing really well.

The Cubs have now won 7 in a row for the first time in over 2 years. 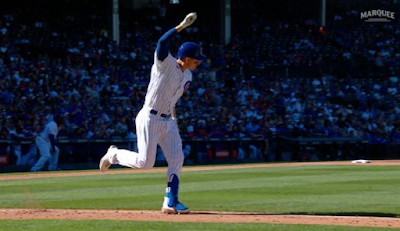 From the game story link above:

This was the fourth game in a row, and the fifth out of six, in which Schwindel delivered the game’s decisive hit and RBI. [...] Entering Monday’s action, Schwindel was tied for third in the Majors with 44 hits since Aug. 1. In that span, he was one of only 14 players with at least 10 homers. He was tied for fourth with 29 RBIs. Only Bryce Harper (1.9), José Ramírez (1.8) and Aaron Judge (1.7) had more WAR (via FanGraphs) than Schwindel’s mark of 1.6 (tied with three other players). ... After his two-hit showing on Monday, Schwindel upped his slash line with the Cubs to .374/.421/.699. The first baseman had a 194 wRC+ since coming to Chicago, indicating that he has performed 94 percent above the Major League average offensively. It’s no wonder he took home the National League’s Rookie of the Month Award for August.

The dude is on fire. Time will tell, as always, but as fill-in manager Andy Green notes in the post-game press conference (while Ross recuperates), the way Schwindel manages to get the barrel of the bat on a pitch wherever it’s thrown, and stays balanced and keeps his hands back, has been impressive.

Let me take this opportunity to note that this is exactly what I’ve been complaining about with this team — guys like Javy Baez, and others — for years now. So, YAY.

Lineups need guys 1-8, whether power hitters or not, who can hit to all fields especially with two strikes, because the reality is that skill is the difference between contending for World Series and watching other teams contend for World Series on TV.

Several other players who were denied playing time by the presence of the star players have shown they can hit like this too — Rafael Ortega, for one, and others have shown flashes here and there.

Again, I’m not calling for scheduling any 2024 World Series parades at this point. It’s far too early to predict anything with this team, and I’ve seen this movie before.

Baseball history is littered with guys who were great for a month, or a season. It’s not that meaningful, the vast majority of the time.

But that doesn’t mean we can’t enjoy it while it’s here.