The replies to this recent @baddantakes tweet showed a lot of love for a Steely Dan album I had somehow never really taken to, “Countdown to Ecstasy”, so I decided I should re-listen to it on Spotify while out walking one day last week. 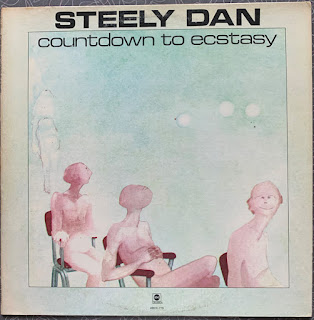 Turns out, there are some killer tunes on it that I had dismissed back in 1978-9 when I bought it originally, on vinyl.

On my re-listen adventure the first song I chose — for what reason I do not know — was the last tune on the album, “King of the World”. It’s amazing, especially the guitar fills throughout and instrumental breaks at 2:00 and 3:45.

Just “wow”. That is some pretty sweet playing and arranging right there.

This was just their second album, from 1973.

... again, the instrumental breaks at 2:30 and 4:45 are killer, plus the hot horn arrangments throughout, and a singalong chorus ...

... and my other favorite is “Pearl of the Quarter”, a shuffle with beautiful lap steel guitar throughout and a melancholy melody but a chorus that just sticks in your head with a wonderful jazz chord walkdown, and of course a sweet instrumental break at 2:45.

More on Steely Dan and this album later.