At noon on August 9, Nixon officially ended his term, departing with his family in a helicopter from the White House lawn. Minutes later, Vice President Gerald R. Ford was sworn in as the 38th president of the United States in the East Room of the White House. After taking the oath of office, President Ford spoke to the nation in a television address, declaring, “My fellow Americans, our long national nightmare is over.”

The long national nightmare wasn't really over, but it was still the right move. Enough is enough. 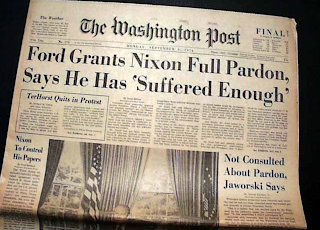 The media had feasted on this carcass for years already and Woodward and Bernstein made their national reputations by doing the political dirty work for poor slob Mark Felt, the “Deep Throat” anonymous source that supplied most of the dirt on the big players.

It was a ridiculous scandal from beginning to end and every adminstration before and since has done worse and totally gotten away with it, but we got to watch this unfold on a daily basis and tell ourselves we were witness to something really bad here.

George Friedman (from the link above) gets it exactly right:

The Washington Post created a morality play about an out-of-control government brought to heel by two young, enterprising journalists and a courageous newspaper. That simply wasn't what happened. Instead, it was about the FBI using The Washington Post to leak information to destroy the president, and The Washington Post willingly serving as the conduit for that information while withholding an essential dimension of the story by concealing Deep Throat's identity.

Yes, that is exactly what happened, regardless of our opinions on Nixon as president.

If the anonymous leaker has an axe to grind, maybe they’re just a pissed-off ankle-biter instead of a brave truth-teller. Keep that in mind, because this issue has gotten worse, not better.

And now every DC scandal gets the “-gate” suffix because of it. Clever.