“If you rake, you rake, right?” — David Ross, Cubs Manager

I first wrote about Schwindel a few weeks ago, and he’s still killing it with his 23rd multi-hit game (out of 51) Tuesday since he joined the team 2 months ago (a waiver pickup from Oakland).

Small sample size, yes, and career minor-leaguer, (mostly) yes ... but as his manager Ross says above, hitting this good for this long is pretty hard to ignore, especially because he’s hitting for contact and spraying the ball all over the field, with power.

That’s really solid offensive production in 2 months. Power plus a 200+ hits-per-season pace (and for context you can do the math on the rest of those numbers projected over a full season, but they’re very good).

A nice blend of contact and power, and while we cannot really call him a contact hitter, per se, he’s in the neighborhood.

Watch his swing on this homer to right.

Balanced, in control, hands back, doesn’t open hips too far or too early. Hits an outside pitch hard to the opposite field for a homer. 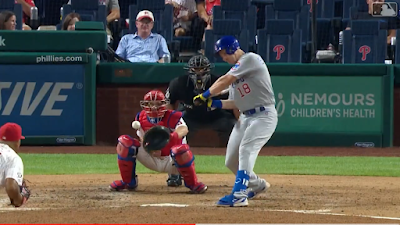 I hope he continues it next year in a Cubs uniform. And I hope their scouting and development guys are paying attention.