On This Day in 1900 Quantum Theory is Born

German physicist Max Planck creates an entirely new understanding of the behavior of sub-atomic particles, which classical physics had so far been unable to explain, by publishing his “blackbody radiation” paper:

Through physical experiments, Planck demonstrated that energy, in certain situations, can exhibit characteristics of physical matter. According to theories of classical physics, energy is solely a continuous wave-like phenomenon, independent of the characteristics of physical matter. Planck’s theory held that radiant energy is made up of particle-like components, known as “quanta.” The theory helped to resolve previously unexplained natural phenomena such as the behavior of heat in solids and the nature of light absorption on an atomic level. In 1918, Planck was awarded the Nobel Prize in physics for his work on blackbody radiation.

I’ve read a fair bit on quantum physics but it was a long time ago ... so going from memory here, don’t shoot me, I’m only the blogger ...

Energy (light and other forms of electromagnetic radiation) was discovered to have mass like physical matter, meaning it could be affected by gravity, among other things. It sometimes acts like a particle, sometimes like a wave, depending on the experiment you perform — think about that for a second, you as an observer affect the results.

Picture two billiard balls on a pool table, a white cue ball and a black 8 ball. Picture yourself hitting the cue ball to then hit the 8 ball, and all the places each ball can end up and how quickly they get there.

Classical Newtonian physics says you can know exactly where each ball will end up and how fast each will get there, based on a bunch of variables like the mass and speed of the cue ball, friction, gravity, etc. Plug the right numbers in and your experiment should match exactly, if you do it right. It’s a system with predictable outputs.

Now picture subatomic particles, two electrons for example, doing the same type of collision. Quantum physics (quantum mechanics in this case) says instead that you cannot predict with absolute certainty any of those outcomes, you can only assign probabilities like “95% chance of ending up in this area but only 35% in that”, etc. 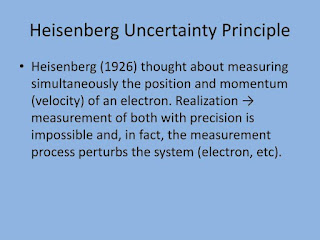 Not only that, you cannot simultaneously measure both the speed and position of any subatomic particle in motion accurately, and the more accurately you measure one, the more inaccurate the other.

Suddenly, science had to grapple with uncertainty. Lots and lots of it.

This was a seismic shift in not just the world of science, but in philosophy and especially our understanding of the limits of knowledge.

We thought we knew everything about how the world worked until then, and people today are making the same mistake, and people tomorrow will make it too.