75 Years Ago, the Flamingo Hotel Opens 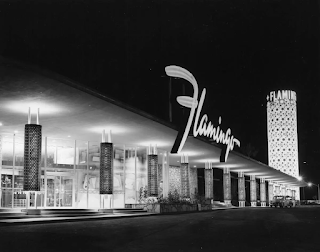 Things did not go well at first — he lost $300,000 in the first week of operations, and it closed one week later.

It re-opened March 1, 1947 — but within a few months Siegel was murdered, by persons unknown — cough the New York mob cough — for skimming profits.

Thus dawned a 40 year run of mob control of the casinos and hotels there:

During the 1950s and 1960s, mobsters helped build the Sahara, the Sands, the New Frontier and the Riviera. Money from organized crime combined with funds from more respectable investors—Wall Street banks, union pension funds, the Mormon Church and the Princeton University endowment. Tourists flocked to the resorts—8 million a year by 1954—drawn by performers such as Frank Sinatra, Dean Martin and Elvis Presley, and by rows of slot machines and gaming tables.

The alleged mobsters who allegedly murdered Bugsy Siegel were most likely, allegedly, the Meyer Lansky faction of the alleged New York mob. Today there's a restaurant named Bugsy and Meyer's. So after running way from its "colorful" mob history for decades, Las Vegas flipped over to recognize it and — of course — commercialize it.