“How Many Divisions Has the Pope?”

He Had a Lot, Back in the Day, As It Turns Out 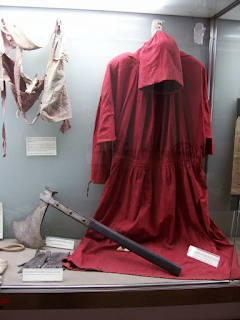 Via Twitter I learned that Giovanni Battista Bugatti was the “official executioner for the Papal States” for almost 70 years and executed over 500 people.

Wait a minute ... the Papal States? Who and what is that?

Turns out that until 1870 there used to be a set of city-states called the Papal States — modern-day central Italy, mostly — under direct sovereign rule of the Pope for over 1100 years, from 754 AD until 1870.

To give you an idea of how chaotic and messy the local politics of the time were, a Kingdom of Italy had been formed in 1861 (part of Italian Unification) from several independent city-states, but the new parliament could not seat itself in its own capitol city of Rome because it was controlled by the French military in support of the Pope and his Papal States. This lasted nine years, until 1870 and the Capture of Rome.

The details behind this will make your head spin.

In July 1870, the Franco-Prussian War began, and by early August, Napoleon III recalled his garrison from Rome. The French not only needed the troops to defend their homeland, but were concerned that Italy might use the French presence in Rome as a pretext to join the war against France. In the earlier Austro-Prussian War, Italy had allied with Prussia, and Italian public opinion favored the Prussian side at the start of the Franco-Prussian War. The removal of the French garrison allowed France to remain neutral and eased tensions between France and Italy.

With the French no longer manning the Pope's walls, widespread public demonstrations demanded that the Italian government take Rome. But the city remained formally under French protection, and an attack would still have been regarded as an act of war against the French Empire. Furthermore, Prussia had gone to war in an uneasy alliance with the Catholic South German states that it had fought against (alongside Italy) just four years earlier. Although Prussian prime minister Otto von Bismarck was no friend of the papacy, he knew any war that put Prussia and the Holy See in opposing alliances would upset the delicate pan-German coalition needed for German unification. For both Prussia and Italy, any misstep that broke the pan-German coalition risked Austro-Hungarian intervention in a wider European conflict.

Above all else, Bismarck made every diplomatic effort to keep Prussia's conflicts of the 1860s and 1870s localized and prevent them from spiraling out of control into a general European war. Therefore, not only was Prussia unable to offer any sort of alliance with Italy against France, but actually pressured Italy to remain neutral and keep the peace on the Italian peninsula, at least until Prussia's conflict with France had passed. Moreover, the French Army was still regarded as the strongest in Europe – and until events elsewhere took their course, the Italians were unwilling to provoke Napoleon.

It was only after the surrender of Napoleon and his army at the Battle of Sedan that the situation changed radically. The French Emperor was deposed and forced into exile. The best French units had been captured by the Germans, who quickly followed up their success at Sedan by marching on Paris. Faced with a pressing need to defend its capital with its remaining forces, the French provisional government was clearly not in a military position to retaliate against Italy. In any case, the new French Republic was far less sympathetic to the Holy See than the Empire and did not possess the political will to protect the Pope's position.

The Capture of Rome on September 20, 1870 marked the end of an era:  the poor Pope had no territory left to rule over but the actual church property — St Peter’s Basilica, the papal residence, and the Vatican itself — until 1929 when Mussolini created and handed over Vatican City.

Because, really, how can a major world religion be led by someone who is not also leader of a sovereign nation?

European history is filled with nastiness like this, where constant war and conflict from constantly changing alliances between competing kingdoms and church bodies (especially the Pope) blurred the lines —there weren’t any lines, really — between religious and state power and control.

It was a long, bloody, chaotic, miserable struggle and looking back now it’s very easy to see two things: