Note how completely different the entire outfield looks compared to today … a square with outfield walls at right angles to the foul lines, the bleachers right at field level, and how far straightaway centerfield is ... 440’ according to the History of Wrigley Field article at Wikipedia (substantially further, at least 40 feet further, than today’s wall).

This extremely deep centerfield wall was very common for older ballparks, with outfield walls at right angles to the foul lines, creating a giant square, more or less. Forbes Field in Pittsburgh was 460’ and the Polo Grounds was 483’ — and 450’ to the power alleys! Lots of triples back in the day and fewer homers (but maybe more inside-the-park home runs).

Back to the Wrigley Field photo ... also note the temporary wooden bleachers, which the team also put up during the 1929 and 1935 World Series. And streetcars on Clark Street (the diagonal street at bottom right). 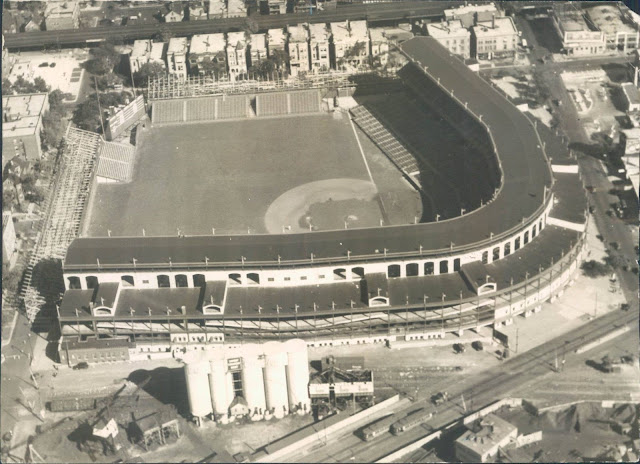 The scoreboard, bleachers, and outfield walls were completely rebuilt in 1937 to their rather unique dimensions, with the shortest power alleys but longest distance down the foul lines in the entire major leagues, as far as I know.

That same year the iconic ivy was planted by Bill Veeck, an executive of the team (his father William Veeck Sr, a former sportswriter, was president of the team starting in 1919 until his death in 1933).

Bill Veeck of course would go on to become a revolutionary owner of the Indians, Browns, and White Sox (twice). His autobiography “Veeck as in Wreck” is a fascinating story about a hard-working and creative entrepreneur, a must-read for any baseball fan. More on him later.

For those interested in old ballparks and their history, the above history of Wrigley article is worth reading.