An Excellent Music Documentary about Terry Kath of Chicago

Made by his daughter Michelle who was just two years old when he died.

She interviews all surviving bandmembers who all clearly miss him to this day — it actually goes far deeper than that but you’ll have to watch to the end to see just how much he meant to all of them — plus Joe Walsh (who toured with them with his band The James Gang), longtime producer James William Guercio (also producer for The Buckhinghams among others before that) plus several others.

He was a regular guy into cars, guns, and guitars but he was also the frontman and clearly the leader of this great band. He couldn’t read music but he could create it — James Pankow tells an amazing story about transcribing the music for “Introduction” their first song on the first side of their first album, and quite an introduction it was.

He composed all that in his head somehow, without the ability to write it down. I don’t even know how you would do that . . .
Terry Kath would get my vote for Most Severely Underappreciated Musician (and singer) of the rock era. If it’s not him, he’s in the top 10.
Michelle is also on a quest to find his famous Fender Telecaster covered with stickers including a Chicago Blackhawks logo ... let’s just say it ends well. 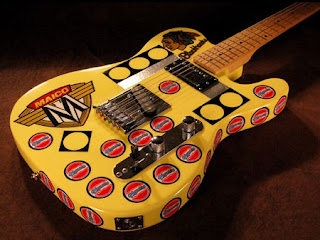 Watched it yesterday. Highly recommended. An hour and 20 minutes out of your life that you will not regret.