Goodbye to a legend in the folk music world.

Nanci Griffith, In Memoriam: An Appreciation of Folk and Americana Music’s Sweet but Gritty Beacon

Nanci Griffith dies at age 68: The Grammy-winning folk singer-songwriter best known for the song Love At The Five And Dime passes away 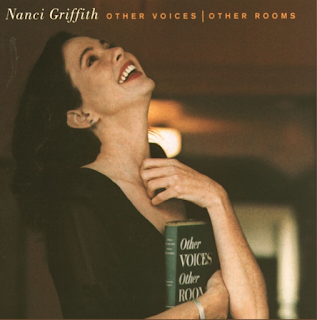 Her album “Other Voices, Other Rooms” from 1993 was a tribute to her many and various folk music influences, with songs written by Tom Paxton, John Prine, Woody Guthrie, Bob Dylan, Gordon Lightfoot, Townes Van Zandt, Buddy Mondlock and several other greats. It’s just as great as you might think it would be.

I bought “Other Voices, Other Rooms” when it came out without having heard much of her music, or even knowing she had written and recorded the Kathy Mattea hit “Love at the Five and Dime”.

Over time it became one of my favorite albums because of its incredible warmth and intimacy, along with the great music.

It feels like family and friends playing music with great personal meaning while sitting on your front porch.

This album was, along with John Prine — who passed last year — my true introduction to folk music. I became a fan directly as a result of listening to it.

The first song on it that I really latched onto was “Speed of the Sound of Loneliness”, a beautiful John Prine song about running from life to escape failed love.

The first two verses and choruses:

She of course had other great albums which I have discovered over time, and remain to be discovered.

A solo, live version of her classic “Love at the Five and Dime”. She tells a good story about how the song came about: she had to write a song for a songwriter’s seminar and came up with it in 20 minutes from a short story she had written, and thought she would never play it again!

The original, from her excellent 1986 album “Last of the True Believers”.