Congrats to Ocon on his first F1 win ever, and to the Alpine racing team.

His win illustrates the fact that all of these drivers are excellent but on race day “shit happens” creating opportunities — and on this day there was a bit of a pile-up in the first turn of the first lap on a rainy, wet and greasy track that opened up a big lane for him to jump ahead from his starting position at #8.

After the first lap, and then a red flag to clean up debris on the track, and then a restart, 5 cars were retired — Bottas, Perez, LeClerc, Stroll, and Norris. Bottas is later penalized 5 spots on the grid for the next race for braking too late.

Hamilton started at the pole position but fell to last (14th) during a pit stop, to change over to slicks from rain tires I believe, but managed to pass 11 drivers to finish 3rd and get another podium. Vettel was second (but later disqualified, see below).

Click image or here for the video of the start and turn 1 collisions. 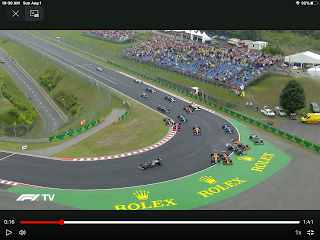 Later Sunday F1 announced that 2nd place finisher Sebastian Vettel (Aston Martin) was disqualified for being unable to extract 1 litre of fuel at the end of the race, costing the team and driver 18 points. What issue are they resolving with a requirement of 1 full litre as opposed to, say, 1/2 or 1/4 or even 1/10? Probably to avoid hazards from running out during the race, I guess, but wouldn’t 1/2 litre do that too and avoid bullshit penalties like this? This seems far too punitive. Aston Martin will appeal of course, good luck with that.
published on Sunday, August 01, 2021
Labels: F1 Grand Prix, Formula 1, Sports
Newer Post Older Post Home