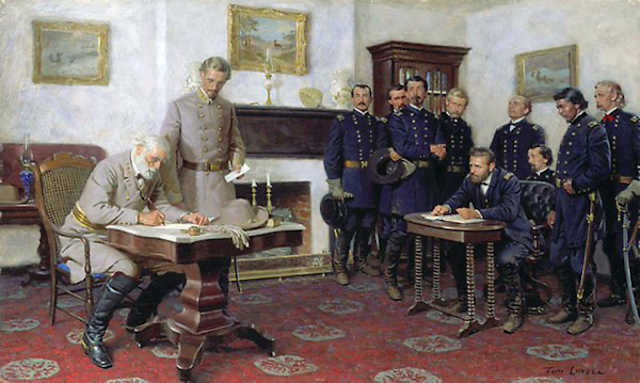 In retreating from the Union army’s Appomattox Campaign, the Army of Northern Virginia had stumbled through the Virginia countryside stripped of food and supplies. At one point, Union cavalry forces under General Philip Sheridan had actually outrun Lee’s army, blocking their retreat and taking 6,000 prisoners at Sayler’s Creek. Desertions were mounting daily, and by April 8 the Confederates were surrounded with no possibility of escape. On April 9, Lee sent a message to Grant announcing his willingness to surrender. The two generals met in the parlor of the Wilmer McLean home at one o’clock in the afternoon.

Lee asked for the terms, and Grant hurriedly wrote them out. All officers and men were to be pardoned, and they would be sent home with their private property–most important, the horses, which could be used for a late spring planting. Officers would keep their side arms, and Lee’s starving men would be given Union rations.

Grant said “[The Rebels] were now our countrymen. We did not want to exult over their downfall”.

It’s very apparent from reading Grant’s account of the surrender in his memoirs that his immense respect for General Lee and their shared West Point heritage got in the way here:

… I felt like anything rather than rejoicing at the downfall of a foe who had fought so long and valiantly, and had suffered so much for a cause, though that cause was, I believe, one of the worst for which a people ever fought, and one for which there was the least excuse. I do not question, however, the sincerity of the great mass of those who were opposed to us ...

We soon fell into a conversation about old army times. He remarked that he remembered me very well in the old army; and I told him that as a matter of course I remembered him perfectly, but from the difference in our rank and years (there being about sixteen years' difference in our ages), I had thought it very likely that I had not attracted his attention sufficiently to be remembered by him after such a long interval. Our conversation grew so pleasant that I almost forgot the object of our meeting. After the conversation had run on in this style for some time, General Lee called my attention to the object of our meeting, and said that he had asked for this interview for the purpose of getting from me the terms I proposed to give his army.

Five days later President Lincoln was assassinated. Grant won two terms as president starting in 1868 and was a key leader in the Reconstruction effort, which Johnson (Lincoln’s vice president) had resisted.

I’m a little surprised that this day is not more widely known, remembered, and commemorated since the U.S. Civil War was one of the bloodiest and ugliest wars in our history.