Ted Lasso and his Epic and Often Hilarious Quotes

Jason Sudeikis is Ted Lasso, an American football coach with a relentlessly positive can-do attitude and a “down home” demeanor who talks a mile a minute and smiles 24x7 — and also somehow gets hired to coach a British soccer team despite zero knowledge of the sport. 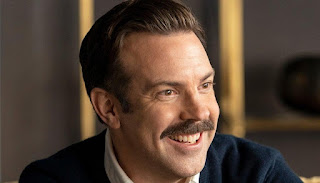 The reason for that has to do with the new owner, a divorced woman named Rebecca who becomes owner as a result of the divorce and wants to make the team as horrible as possible to get back at her ex. Rebecca might need a life coach, not just a soccer coach.

It’s really an ensemble cast with several supporting characters, all of them developed and explored in some depth over the two seasons released so far, and almost all of them very likable. Except Nate. You’ll see why if you watch it.

It’s my favorite type of show: comedy with real human stories woven into it. Like real life: comedy and tragedy all mixed up in a stew.

His quotes have become one of the centerpieces of the show. Here’s a list of 65 Ted Lasso quotes from which I pulled a “Top Twelve” of my own below.

Since he’s a coach, the main themes are leadership and putting the team first, but he delivers them with self-deprecating humor so it hits a little different.

This video shows examples of his leadership.

Some of the best scenes from season 1.

He does a few quotes in every show and at first they catch you off-guard because they seem so random and odd but after a few episodes you start looking for them in anticipation.