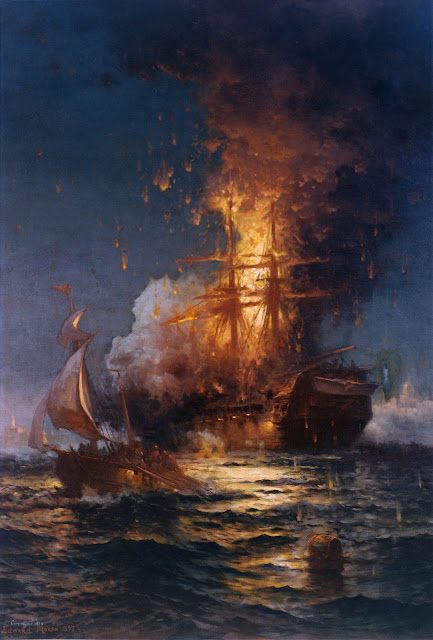 During the Barbary Wars in the early 1800s the U.S. Navy — tired of American merchant ships and cargo seized by pirates who enslaved and held their crews for exorbitant ransom, and fearing strategic disadvantage with the capture in 1803 of a newer and more advanced Navy warship — did something incredibly daring about it.

In October 1803, the U.S. frigate Philadelphia ran aground near Tripoli and was captured by Tripolitan gunboats. The Americans feared that the well-constructed warship would be both a formidable addition to the Tripolitan navy and an innovative model for building future Tripolitan frigates. Hoping to prevent the Barbary pirates from gaining this military advantage, Lieutenant Stephen Decatur led a daring expedition into Tripoli harbor to destroy the captured American vessel on February 16, 1804.

After disguising himself and his men as Maltese sailors, Decatur’s force of 74 men, which included nine U.S. Marines, sailed into Tripoli harbor on a small two-mast ship. The Americans approached the USS Philadelphia without drawing fire from the Tripoli shore guns, boarded the ship, and attacked its Tripolitan crew, capturing or killing all but two. After setting fire to the frigate, Decatur and his men escaped without the loss of a single American. The Philadelphia subsequently exploded when its gunpowder reserve was lit by the spreading fire.

Hugely successful — you simply cannot be any more successful than that.

Lt. Decatur was quickly becoming a national hero, and is still to this date the youngest person ever promoted to Captain in the history of the U.S. Navy.

Decatur supervised the construction of several U.S. naval vessels, one of which he later commanded. Promoted at age 25, he is the youngest man to reach the rank of captain in the history of the United States Navy. He served under three presidents, and played a major role in the early development of the U.S. Navy. In almost every theater of operation, Decatur's service was characterized by acts of heroism and exceptional performance. His service in the U.S. Navy took him through both Barbary Wars in North Africa, the Quasi-War with France, and the War of 1812 with Britain. He was renowned for his natural ability to lead and for his genuine concern for the seamen under his command. His numerous naval victories against Britain, France and the Barbary states established the United States Navy as a rising power. ... Decatur emerged as a national hero in his own lifetime, becoming the first post-Revolutionary War hero. His name and legacy, like that of John Paul Jones, became identified with the United States Navy.

At a hugely important time in American history, with a new and yet-to-be established Navy and seafaring reputation, this kind of leadership is exactly what was needed.

A map of the Barbary Coast region for visual context. 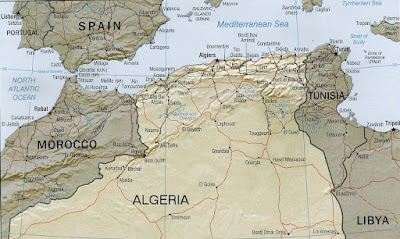 “To the shores of Tripoli” in the US Marines Hymn refers to these Barbary Wars.

Capt. Decatur was killed in 1820 at just 41 years of age in a duel with a Commodore Barron, who demanded that Decatur retract remarks he made as an officer presiding over Barron’s court-martial and later about Barron’s conduct during the Chesapeake-Leopard affair in 1807, one of the events that led to the War of 1812. It’s worth reading more, but to summarize, Barron as commander of the USS Chesapeake during the incredibly chaotic Napoleonic Wars was unprepared for battle when confronted by a British Royal Navy ship looking for deserters on board, and surrendered after firing just once. The incident enraged the public in the U.S., both because of apparent U.S. Navy vulnerabilities and a lack of respect from the British in the incident’s aftermath.