And I am not a fan

Here’s a funny and entertaining video talking about it — the main reason is that the league wanted to optimize branding revenue and since Reebok didn’t offer suits 20 years ago, no suits allowed (video has a long and annoying ad up front, skip to 1:40 to avoid it).

It mentions both Mike Nolan of the 49ers and Jack Del Rio of the Jaguars as the last two guys to challenge this situation around 2005-6. 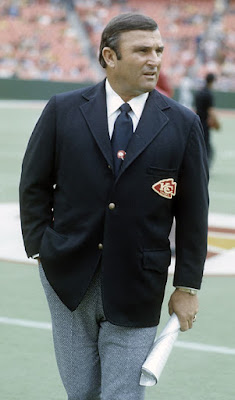 I’m old school about things like this. Coaches look more authoritative, grown up, and classy with suits on, because everyone does. It just sends a different and more serious message to have the leader of the team dressed like he means business, rather than wearing athletic gear adorned with logos. He stands there holding a clipboard — what does he need athletic gear for?

Here’s Hank Stram (at right). How could you ever look more in charge than that? You can’t.

And we already get quite enough logos with the players and their uniforms, do we not? Is adding more of that — with coaches — clearing anything up for anyone, really? I find that hard to believe.

But the NFL, which is run by lawyers obsessed with two things, revenue and rules, may want to revisit this to counter several recent negative PR disasters, especially the disturbing and serious player criminality “thug” problem in the league over the last 25 years.

The league also turns itself into a cartoon show every October with the over-the-top display of pink gear everywhere you look, but fined Earl Bennett of the Bears for wearing orange shoes even though orange is one of the team’s colors: against The Rules. There’s a reason that people joke that NFL stands for No Fun League. 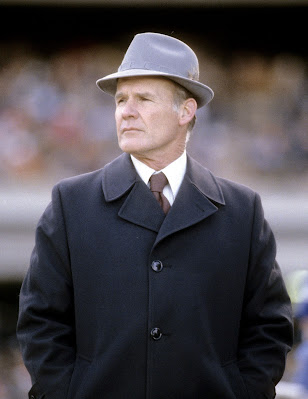 Against this onslaught of cultivating a poor image with bad decision making, they could help themselves in the image department by allowing coaches to dress like coaches again.

Like this guy, Tom Landry of the  Dallas Cowboys.

This kind of thing is one of many many reasons that modern pro sports push me away, little by little, year by year: it just doesn’t speak to me like it used to.