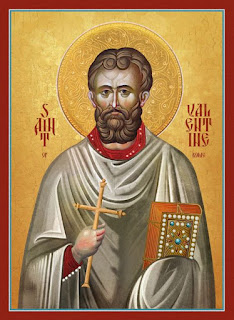 The clergyman for whom the day was named was beheaded in 269 (or 270) AD by a bloodthirsty warmongering tryant named Emperor Claudius II:

Under the rule of Claudius the Cruel, Rome was involved in many unpopular and bloody campaigns. The emperor had to maintain a strong army, but was having a difficult time getting soldiers to join his military leagues. Claudius believed that Roman men were unwilling to join the army because of their strong attachment to their wives and families.

To fix that problem, he banned all marriages and engagements in Rome. That’s top notch craziness.

Valentine, not being crazy, continued performing marriages in secret, and tried to convert Claudius the Cruel to Christianity — at which time a new nickname would be needed, I suspect — but it didn’t seem to work, since Claudius sentenced him to death by clubbing and beheading.

The origin of the closing salutation “From your valentine”, the legend continues, was Valentine sending a note to the daugher of the jailer and signing it that way.

He was later elevated to sainthood after his death, and in 496 AD, February 14 was officially designated St. Valentine’s Day by Pope Gelasius.

So, technically speaking, St Valentine’s Day is at least in part a Christian holiday rooted in standing up to tyrants for the natural rights of normal folks.

There is still a lot of dispute about the details and history of St. Valentine’s Day. Award yourself 10 points if you guessed that it replaced a weird and violent pagan festival of sex and debauchery.

Known as Lupercalia, this “fertility ritual” was celebrated on February 15 every year since the 6th Century BC to honor a she-wolf who nursed twin boys Romulus and Remus who were rescued after being sentenced to death by their uncle, King Amulius, for a broken vow of celibacy by their mother. No, I don’t get it either, but this was life under Ancient Roman tyrants. This article about the founding of Rome explains it a bit more sensibly.

The festival started with animal sacrifices — of course — and then:

When the feast of Lupercal was over, the Luperci cut strips, also called thongs or februa, of goat hide from the newly-sacrificed goats.

They then ran naked or nearly-naked around Palantine whipping any woman within striking distance with the thongs.

During Lupercalia, the men randomly chose a woman’s name from a jar to be coupled with them for the duration of the festival. Often, the couple stayed together until the following year’s festival. Many fell in love and married.

Over time, nakedness during Lupercalia lost popularity. The festival became more chaste, if still undignified, and women were whipped on their hands by fully-clothed men.

Oh well, as long as they weren’t naked any more, the whipping sounds totally normal now.