This Week in 1948: Ghandi Assassinated 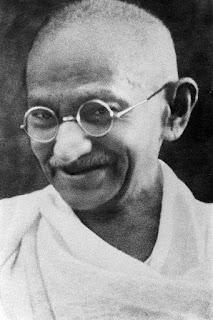 He did good things for many many people and provided leadership where and when it was required, and you can read more about that at Wikipedia, but he had some controversial ideas, to say the least.

Some things you may not know:

As a young man fresh out of law school and unable to find suitable work in India he lived in South Africa for 20 years from 1893-1914, and experienced firsthand there how Indians as a group were subjugated with no rights, so as a result he started a campaign to win rights for Indians — but at the same time, according to this vice.com story, he apparently still thought blacks were subhuman and did nothing to help them. It’s possible this was tactical triangulating against White and Black on his part, or modern day historical revisionism by partisan stakeholders, or some combo of the two, I do not know. But racism by non-whites around the world against other non-whites, is quite common and always has been — racism is racism no matter who it targets, or who practices it.

He was assassinated by a Hindu extremist who did not like the partitioning of India into two states, along sectarian lines creating Pakistan as predominantly Muslim and India as predominantly Hindu with Buddhist and Muslim minorities, and thought Ghandi supported it — which he didn’t, but it really was a bad idea, as these efforts usually are. They’ve been at each other’s throats ever since. Who knew?

This one is really strange.

As an old man he had this very odd and hard-to-explain habit of sleeping in the same bed with young girls, every night — even family members — supposedly to test his vow of celibacy. Interesting method, that. As a young married man in his 30s, he had taken a vow of “total chastity in thought and deed”. Cecil Adams at The Straight Dope explains:

Mohandas Gandhi’s sleeping arrangements attracted public attention during the winter of 1946-47, when he was trying to quell violence between Muslims and Hindus in the Noakhali district in what is now Bangladesh. It came out that Gandhi was bunking nightly with his 19-year-old grandniece, Manu. In part this was an effort to stay warm in the winter chill, but Gandhi soon acknowledged there was more to it: he was testing his vow of brahmacharya, or total chastity in thought and deed. If he could spend the night in a woman’s embrace without feeling sexual stirrings, it would demonstrate that he had conquered his carnal impulses and become “God’s eunuch.” It turned out that Manu was not his first brahmacharya lab partner — he’d also recently gotten naked (partly, at least) with another young woman in his extended family, starting when she was 18.

Hmm … I just don’t know about all that … but just for kicks let’s grant him wide berth and assume he’s being straight with us.

First of all, he’s almost 80 but he still needs to test himself with a 19 year old? A family member? And another 18 year old family member? I have no experience with that mindset, but it seems quite possible to take a vow of chastity and, you know, not invite girls who are barely 18 into your bed due to some compulsive need to “test yourself”. Jesus had pretty good success with that model, I hear.

And if Ghandi was just some rando instead of a revered political and social leader, is he still talking 19 year old girls into bed with him, physical intimacy or not? It has the definite stench of taking advantage of your status to get people to do things they might not otherwise do.

So, who knows, maybe it was what he claimed it was, but the whole thing sounds very, very weird.