This Week in 1998: Ted Kaczynski aka “The Unabomber” Pleads Guilty

The basic details via history.com:

Born in 1942, Kaczynski attended Harvard University and received a PhD in mathematics from the University of Michigan. He worked as an assistant mathematics professor at the University of California at Berkeley, but abruptly quit in 1969. In the early 1970s, Kaczynski began living as a recluse in western Montana, in a 10-by-12 foot cabin without heat, electricity or running water. From this isolated location, he began the bombing campaign that would kill three people and injure more than 20 others. 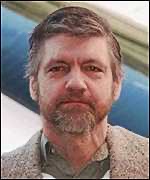 Harvard, when getting into that school still meant something. PhD in Math from Michigan. Assistant Math Professor at Berkeley. All by age 27.

Then he chucked it all and moved to a 10x12 cabin in Montana with no heat, electricity or plumbing.

Where did the “Unabomber” name come from?

The primary targets were universities, but he also placed a bomb on an American Airlines flight in 1979 and sent one to the home of the president of United Airlines in 1980. After federal investigators set up the UNABOM Task Force (the name came from the words “university and airline bombing”), the media dubbed the culprit the “Unabomber.”

His manifesto makes for some interesting reading, especially when one considers (a) he possessed a brilliant, technical, analytical mind, and (b) he wrote it in 1995, well before the Internet and technology were big factors in the lives of “regular people”.

Wikipedia summarizes it as follows.

The manifesto argues against accepting individual technological advancements as purely positive without accounting for their overall effect, which includes the fall of small-scale living, and the rise of uninhabitable cities. While originally regarded as a thoughtful critique of modern society, with roots in the work of academic authors such as Jacques Ellul, Desmond Morris, and Martin Seligman, Kaczynski's 1996 trial polarised public opinion around the essay, as his court-appointed lawyers tried to justify their insanity defense around characterizing the manifesto as the work of a madman, and the prosecution lawyers rested their case on it being produced by a lucid mind. […]

At 35,000 words, Industrial Society and Its Future lays very detailed blame on technology for destroying human-scale communities. Kaczynski contends that the Industrial Revolution harmed the human race by developing into a sociopolitical order that subjugates human needs beneath its own. This system, he wrote, destroys nature and suppresses individual freedom. In short, humans adapt to machines rather than vice versa, resulting in a society hostile to human potential.

Kaczynski indicts technological progress with the destruction of small human communities and rise of uninhabitable cities controlled by an unaccountable state. He contends that this relentless technological progress will not dissipate on its own because individual technological advancements are seen as good despite the sum effects of this progress. Kaczynski describes modern society as defending this order against dissent, in which individuals are adjusted to fit the system and those outside it are seen as bad. This tendency, he says, gives rise to expansive police powers, mind-numbing mass media, and indiscriminate promotion of drugs. He criticizes both big government and big business as the ineluctable result of industrialization, and holds scientists and "technophiles" responsible for recklessly pursuing power through technological advancements.

Crazy or no, that is a big list of prescient observations of the world around him, from 1995, well before the rise of the Internet and social media. And he actually started writing it in 1971, 24 years prior.

The full text of the manifesto, called “Industrial Society and Its Future” is here.

Informed opinions are better than the other kind, and I would encourage all to read it for yourself, and keep separate in your mind the essay itself from the deeds he justified with it.

A prison psychiatrist diagnosed him paranoid schizophrenic, and I won’t question that, but nevertheless it appears Kaczynski was onto something many years before the rest of us. Dismiss it at your own peril.