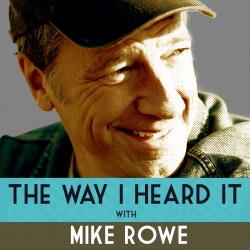 But wait, there’s more:  he started the Mike Rowe Works Foundation over ten years ago to award $1M in scholarships annually to students seeking skilled trades careers, and over that time he has “written extensively about the country’s relationship with work, the widening skills gap, offshore manufacturing, infrastructure decline, currency devaluation and several other topics for which he has no actual credentials.”

In short he is one of the most interesting people in 21st century America, and actively working to make it better.

One thing to note:  the first couple years and 150+ episodes are short form storytelling, typically 5-8 minutes in length, and then somewhere around episode 180 they started doing chapters from Mike’s book “The Way I Heard It” with Chuck. Those are much longer, around an hour and sometimes more.

Go to mikerowe.com/podcast/ or your favorite podcast app and try a couple of episodes.

Podcast tip:  I always listen to podcasts when I’m on the move, either walking or biking, freeing my mind to go wherever the podcast wishes to take it. In the car would also work, I just don’t get much time there.