Let’s Catch Up on TV Viewing 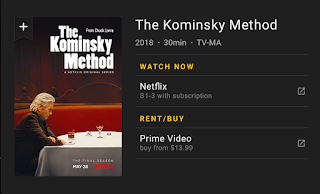 We finished watching The Kominsky Method this week so now there is a hole in our TV schedule that is shaped a lot like this show.

Unlike anything I’ve seen in a long time with very likable characters — we’re all imperfect, let’s not forget — and excellent storytelling with a perfect blend of funny and touching that strikes all the right notes.

This is a difficult balance to achieve and as a result most shows and movies don’t even aim for it. This show aims for it and hits it, dead center.

At the same time I don’t want to undersell the comedy, or Michael Douglas and Alan Arkin, who are both terrific, as always. Two old pros — Arkin turned 87 in March and he could easily pass for someone 25 years younger, Douglas is 77 later this year — together on screen a lot. The show is worth watching for that alone (although Arkin is in seasons 1 and 2 only).

Paul Reiser is also very good as an aging hippie retired teacher and love interest of Sandy’s daughter, 30 years her senior. He plays Paul Reiser, bascially, but for me that’s usually pretty good in small doses. He also achieves the tricky comedy/tragedy balance and does it well.

The full cast is here and also includes Jane Seymour, Emily and Haley Joel Osment, Lisa Edelstein, and many other recognizable names.

You could easily binge-watch the entire series, 22 episodes, in a weekend or two, but this show is good enough you could also spread it out over a few months by watching just 2 or 3 episodes per week. It’s more impactful that way, at least for me.

As for other shows we were watching, we’ve kind of checked out on those. Fargo ... eh, it’s a bit too murdery and dark for summertime viewing. I did watch a couple more episodes of Formula 1: Drive to Survive the other night and have completed season 1. Other than that, a lot of sports including of course Formula 1 Grand Prix. 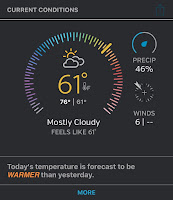 Enjoy the weekend — it’s starting off cool for us and for a July 9 I will take that every time.
published on Friday, July 09, 2021
Labels: Scenes From My Life, Streaming, Video
Newer Post Older Post Home