This Week in History: Shootout at the O.K. Corral

On October 26, 1881, the Earp brothers face off against the Clanton-McLaury gang in a legendary shootout at the O.K. Corral in Tombstone, Arizona. After silver was discovered nearby in 1877, Tombstone quickly grew into one of the richest mining towns in the Southwest. Wyatt Earp, a former Kansas police officer working as a bank security guard, and his brothers, Morgan and Virgil, the town marshal, represented “law and order” in Tombstone, though they also had reputations as being power-hungry and ruthless. The Clantons and McLaurys were cowboys who lived on a ranch outside of town and sidelined as cattle rustlers, thieves and murderers. In October 1881, the struggle between these two groups for control of Tombstone and Cochise County ended in a blaze of gunfire at the OK Corral.

LOL “sidelined as cattle rustlers, thieves, and murderers” ... that’s more of a lifestyle than a sideline gig, I would say. 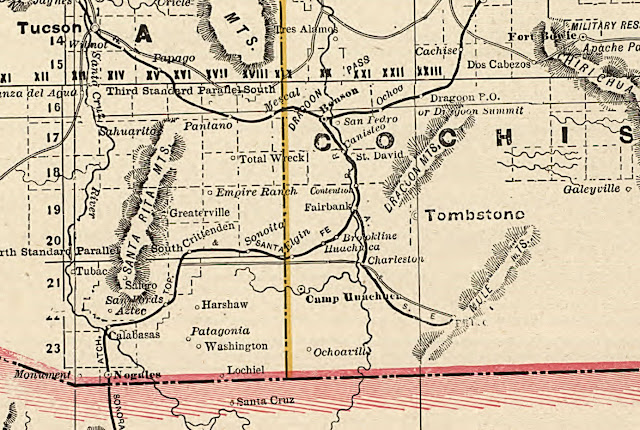 Tombstone, near the Mexican border, was quite the growing boomtown in 1881:

At its founding, it had a population of just 100, and only two years later, in late 1881, the population was more than 7,000 (excluding Chinese, Mexicans, women, and children), making it the largest boomtown in the American Southwest. Silver mining and its attendant wealth attracted many professionals and merchants, who brought their wives and families. With them came churches and ministers. By 1881 the town boasted fancy restaurants, a bowling alley, four churches, an ice house, a school, an opera house, two banks, three newspapers, and an ice cream parlor, along with 110 saloons, 14 gambling halls, and numerous brothels, all situated among a number of dirty, hardscrabble mines.

One hundred ten saloons and fourteen gambling halls and many brothels ... in a town of 7000!

While all that debauchery was going on with the newfound silver wealth, the law enforcement situation was more than a little hazy (from above link):

Horse rustlers and bandits from the countryside often came to town, and shootings were frequent. In the 1880s, illegal smuggling and theft of cattle, alcohol, and tobacco smuggling across the Mexico–United States border, about 30 miles (50 km) from Tombstone, were common. The Mexican government assessed heavy export taxes on these items, and smugglers earned a handsome profit by stealing them in Mexico and selling them across the border.

James, Virgil, and Wyatt Earp arrived in Tombstone on December 1, 1879, when the small town was mostly composed of tents as living quarters, a few saloons and other buildings, and the mines. Virgil had been hired as Deputy U.S. Marshal for eastern Pima County, with his offices in Tombstone, only days before his arrival. In June 1881 he was also appointed as Tombstone's town marshal (or police chief).

Though not universally liked by the townspeople, the Earps tended to protect the interests of the town's business owners and residents; even so, Wyatt helped protect Cowboy "Curly Bill" Brocius from being lynched after he accidentally killed Tombstone town marshal Fred White. In contrast, Cochise County Sheriff Johnny Behan was generally sympathetic to the interests of the rural ranchers and members of the loosely organized outlaw group called the Cochise County Cowboys, or simply the Cowboys. (In that time and region, the term cowboy generally meant an outlaw; legitimate cowmen were instead referred to as cattle herders or ranchers.)

There’s so much more to this story ... read more at the Gunfight at the O.K. Corral Wikipedia entry.

Learning about just this one story serves as a good introduction to the Wild West and what made it distinctive in American history: boomtowns with their huge and immediate wealth and the hedonistic lifestyle that comes with it, conflicts between ranchers and townfolk, a law-and-order situation that was fluid to say the least complete with gun battles in public, and more.

Were I to design an American History curriculum, this story would be in it:  it’s a real event with real people and it illustrates so much about life during that time.

Several movies were made about this historic Wild West shootout, most famously My Darling Clementine and Gunfight at the O.K. Corral.