Memories of the Bears with my Dad

Watching the 1963 Chicago Bears Season Highlights video I discovered recently brought with it warm memories of watching Bears football with my dad on Sunday afternoons in our family room during the 1970s and early 80s.

Watching the Bears together was our thing, a bonding activity we shared; in fact he’s the one who got me started on it in the first place. 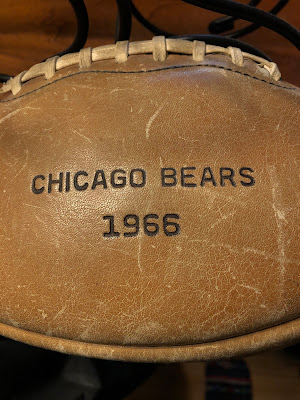 One Christmas back in ‘67 I think he gave me an autographed football from the 1966 Bears, with the signatures of Gale Sayers, Dick Butkus, and several other prominent players. The signatures are pretty faded now, as you can imagine, but still visible.

I still have it. There it is, on the right. It’s one of my few treasured possessions.

We started watching every Bears game together when I was 11, in the 1970 season, and I have many fond memories of sitting in our family room on Sunday afternoons in that decade and into the early 80s —with the dark blue indoor-outdoor carpet and the green L-shaped couch — watching a mostly inferior team lose most of their games, but with some great individual players, especially Butkus and Payton.

Fourteen Sundays per year … we suffered through a lot together. Ask any Bears fan from the late 60s through the early 80s.

Just for some context, in 1969 they went 1-13, tied with the Steelers for worst record in the NFL, and so the NFL flipped a coin to determine who got the #1 draft pick. The Bears lost that too, and the Steelers picked future Hall of Famer Terry Bradshaw, and by the mid-70s they were winning Super Bowls (four in six years) with him along with the many other great players they drafted after him. Bears fans noticed all of this, of course.

During the Walter Payton years starting in 1975 they gradually improved and made the playoffs in the ‘77 season with a 9-5 record — but in the first round they faced the eventual Super Bowl champions, the widely-hated Dallas Cowboys, and of course got destroyed 37-7. This is what it was like to be a Bears fan in that era — the occasional bright spot (making the playoffs after years of failure) followed immediately by crushing disappointment. Suckers!

Then in 1979 they made the playoffs again, at 10-6, but lost to the Philadelphia Eagles 27-17, due to turnovers mostly, but a horrible phantom illegal procedure call that took away an 85 yard run by Payton didn’t help.

During those years our favorite player was, obviously, Walter Payton, but strong safety Doug Plank was not far behind because of hits like these.

Some Walter Payton highlights from probably his greatest individual season, 1977.

By the early- and mid-80s when they gradually became pretty good, it was finally more “the thrill of victory” than the “agony of defeat”, and they finally began to beat very good teams, the royalty of the league.

One memorable game was November 4, 1984 when they played Oakland in one of the most famously brutal hard-hitting games in NFL history, and beat them 17-6.

Then I remember well when we watched together as they won their first playoff game, beating the Redskins in those ‘84 playoffs, which was essentially their coming out party.

Next up, the NFC Championship against San Francisco. They lost 23-0. It was an absolute thrashing. But they did win a playoff game, so … progress. Patience, grasshopper.

Little did we know how fricking great the following season would be, when the 1985 team ran roughshod through the league, going 15-1 and destroying first the Giants and then the Rams, shutting them both out.

Then in the ultimate celebration of the end of an era of futility, we watched Super Bowl XX together, when that ‘85 team destroyed the Patriots 46-10.

That was SO much fun as a Bears fan, and it was a form of therapy for us to be together watching it. After years of frustration, including some really bad teams, then slowly getting better only to lose in the playoffs, I cannot even imagine a bigger turnaround, and a bigger display of total dominance to just put an exclamation mark on the whole post-1963 era, than that 1985 playoff run.