This Week in 1469: Machiavelli Born

Niccolo Machiavelli became widely known for publishing “The Prince” in 1513 as a pamphlet — the book was not published until 1532, posthumously, 5 years after his death in 1527.

The Prince is about ruthless amoral power politics, using war, violence, and religion as tactics, and so his name became synonymous with such nastiness — but ironically it was not autobiographical, it was about a Papal States prince (and Cardinal in the Catholic Church) named Cesare Borgia.

Niccolo Machiavelli himself was far less calculating, and was even marginalized and shunned by his connected political “in group” from 1512 until his death in 1527 … too ethical I suppose?

So who is Cesare Borgia, the guy so ruthless and amoral that he inspired a book that defines it? 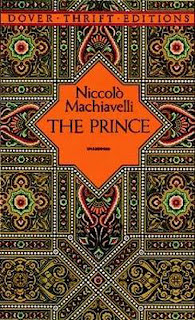 Well, he was just one of several illegitimate children of a Catholic Church Cardinal Rodrigo Borgia — who was elected Pope Alexander VI in 1492.

Takeaway #1 — Cardinals decided that a guy with not just one but several illegitimate children would make a fine Pope.

Good ol’ Rodrigo had clout as a member of the prominent House of Borgia (in modern day Spain) and became a Cardinal shortly after his uncle was elected Pope Callixtus III in 1455.

And since nepotism runs in families, naturally when Rodrigo was elected Pope, he installed his 17 year old son Cesare as Cardinal.

Takeaway #2 — The same guy who inspired “The Prince” was an entitled, power-hungry, rich beneficiary of nepotism and a Cardinal in the Catholic Church at age 17.

You can see where this is going. I’ll stop here. Read on if you like using links above, there’s plenty more of this kind of unpleasantness.

Takeaway #3 — Funny how the entire backstory to “The Prince” is Catholic Church corruption, nepotism, illegitimate children among leadership, etc — but this is not more widely known and flies completely under the radar when people invoke Machiavelli to talk about amoral leadership.

published on Thursday, May 05, 2022
Labels: History, Short Essays, These are my principles and if you don’t like them well I have others
Newer Post Older Post Home