Donald Trump tweets that he believes flag burning should be against the law, and now everyone is in a tizzy.

Personally I have always been a little uncomfortable with the idea that burning the American flag is just another free speech issue, deserving of no special consideration.

To people like me, the flag represents more than freedom, it represents battlefield bravery and sacrifice and honor and heroism. Good people have died for it.

It represents generations past, who had no inkling of my future presence on this planet, but fought anyway, because they fought for the idea that freedom is worth fighting for.

It represents what is good about our nation and our culture. It reminds me that I'm proud of my country, and how lucky and thankful I am to have been born here.

It makes me think of immigrants who cherish freedom enough to emigrate here, and embrace the very uniquely American ideals of God-given freedom, and who have to wait years to become citizens and then take an oath of citizenship that makes them better citizens than many of us who are born here.

It reminds me of the several hundred thousand U.S. military graves in foreign lands around the world. Their loved ones have no grave to visit, without traveling overseas.

A flag is many things, but it is primarily a symbol. Symbols are physical things. They are not speech, technically speaking, so that entire line of argumentation using the First Amendment to protect burning the flag doesn't really make sense to me.

Symbols are vitally important within a culture. They endure when we do not. They represent something much larger than the self: history, culture, pride, legacy. I don't see what we as a nation gain by purposefully allowing people to publicly destroy our national symbol. Is it just so we can hold up the First Amendment that was almost certainly not meant to protect burning the flag in the first place? This seems a stretch. And there are already plenty of exceptions to the types of protected speech under the First Amendment.

Allowing people to act out like spoiled children provides us with nothing of value. I don't really care what the penalty is; make it a cash fine and move on. We don't need to publicly hang these morons, but they can damn sure pay a fine. We fine people for speeding. Is protecting our flag less important?

Sorry if that doesn't line up neatly with arcane legal arguments.

We have already endorsed the idea of exceptions to protected free speech under the First Amendment: inciting violence, libel and slander, obscenity, copyrights, and others. It's not a tiny list.

Can somebody explain to me why all of those things deserve exceptions to an "absolute" freedom, that isn't absolute at all, but the flag that our fathers, brothers, and sons have died for does not? I'm having trouble with that one. Forget the legal arguments, I need a moral and ethical argument on this one.

Exceptions to free speech already exist. So:
That last one is the case that nearly every advocate of flag-burning is making.

I have some trouble with it. Boiled down, they are saying: "free speech is not absolute, because we cannot allow inciting violence and other exceptions, but flag-burning is okay".

I just cannot buy that. And burning our national symbol that we fought wars to protect is not really "speech", to begin with. Does this look like speech? 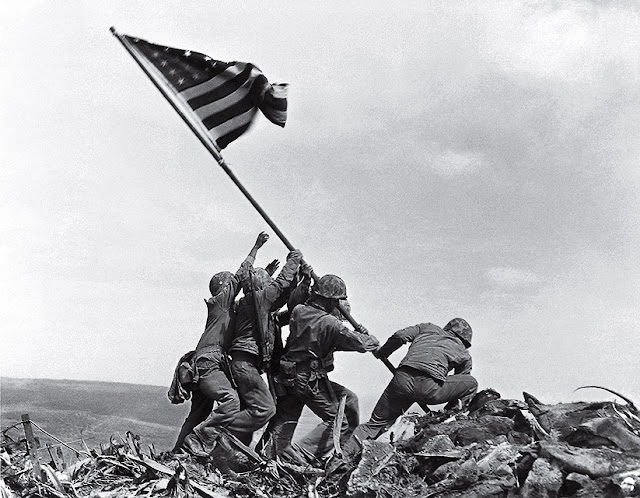 The legal reasoning for exceptions to absolute free speech are apparent:  we must make those specific exceptions because protecting some types of speech as absolute freedoms could cause anarchy, injury, and infringe on the rights of others. In very limited cases, it's worth some restrictions to gain some public good. This is pretty easy to comprehend.

And the flipside is that in all other cases, we gain more public good by having no limits on free speech. Again, easy to comprehend.

But what do we gain by allowing people to burn the flag without a penalty of any kind? It's not like there are no ways to protest the government or make your opinions known. That's what the freedom of speech is for. That's why it's there, right there in the First Amendment. That's how you do it.

While you're pondering that, ponder this: does a nation have a right to preserve and protect its cherished symbols, or not? It seems to me, that's what we're really talking about. We've been dancing around that larger question, using the flag burning debate as a proxy for it. My answer is yes, of course it does, it's long-term national suicide to do anything else, and if you're looking for a reason to support an exception to First Amendment protections, there's a good start.